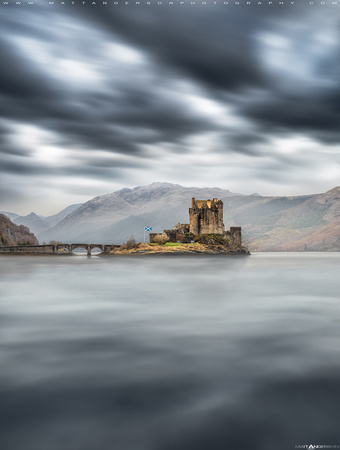 A long exposure captures Eilean Donan Castle in dramatic light; one of the most recognized castles in Scotland. It is a Scottish icon, and certainly one of the most popular visitor attractions in the Highlands. Strategically located on its own little island, overlooking the Isle of Skye, at the point where three great sea-lochs meet, and surrounded by the majestic splendor of the forested mountains of Kintail, Eilean. Eilean Donan, which means simply "island of Donnán", is named after Donnán of Eigg, a Celtic saint martyred in 617. Donnán is said to have established a church on the island, though no trace of this remains. The castle was founded in the thirteenth century, and became a stronghold of the Clan Mackenzie and their allies the Clan Macrae. In the early eighteenth century, the Mackenzies' involvement in the Jacobite rebellions led in 1719 to the castle's destruction by government ships. Lieutenant-Colonel John Macrae-Gilstrap's twentieth-century reconstruction of the ruins produced the present buildings.